Ozark Koala is in the Cache River working on a unique restoration project for Illinois Department of Natural Resources (IDNR).

Over the years, there have been many human-induced changes to the Cache River and surrounding lands.  These alterations have increased the amount of sediment flowing into the river via its many tributaries.  As sediment accumulates, it reduces the depth of the river and increases the potential for seasonal flooding.  Buttonland Swamp, a slow-flowing portion of the lower Cache, acts as a trap for the majority of that sediment.  This location is an Illinois Natural Area managed by the Division of Natural Heritage & the Illinois Nature Preserves Commission.

Over the years, areas that once contained deep-water habitat within the Cache have grown shallow.  This is especially alarming because the Cache River Basin contains a whopping 91% of Illinois’ high quality swamp/wetland communities.  In fact, this area is home to a suite of both state and federally endangered species.  The Cache is located along a migratory path called the Mississippi Flyway, a route traveled by an abundance of bird species each year.  In 1996, the RAMSAR Convention designated the Cache as a Wetland of International Importance because of its value to migratory waterfowl and shorebirds.

Unfortunately, as deep-water habitat disappears, so do the species that utilize these areas, reducing overall species diversity.  For example, dabbling ducks like northern pintails and mallards prefer shallow water, but diving ducks like canvasbacks and redheads prefer deeper water.  In addition, many species of fish utilize deep areas to reproduce and find food.

In increasingly shallow conditions, a native wetland shrub called buttonbush (Cephalanthus occidentalis) has become an opportunistic invader.  This species is normally restricted to wet and/or shallow areas that are close to shore.  However, in Buttonland Swamp and other areas, the buttonbush has spread to form a thick, near-monoculture.  To make matters worse, this species has a dense network of roots that may increase sedimentation by trapping debris.  Areas that were once open water, containing only bald cypress and tupelo trees are now shallow and overgrown. 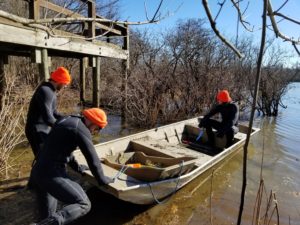 Recently, the IDNR Natural Heritage Biologist for the Cache received a federal grant to fund removal of buttonbush from portions of Buttonland Swamp.  Ozark Koala Ecosystem Services was contracted to head these efforts.  Reduction of buttonbush is just one step in an ongoing effort to restore the Cache by mitigating over a century of human impacts.  So far, fall is our season of choice for this type of management, as water levels are low and most of swamp’s many inhabitants are in hiding.

This October (2017), the Ozark Koala crew began buttonbush removal using handsaws.  Crews wear thick wetsuits to protect them from cold water and air temperatures.  After cutting, the crew loads the buttonbush onto a small boat and takes it to land where it will later be chipped and used as mulch.  We remove cut plant material from the water to avoid oxygen-level depletion as it decomposes.

This ecologically- gentle method was developed by IDNR and Ozark Koala, and does not employ the use of heavy machinery or chemicals.  To our knowledge, no other companies have attempted this form of control.  Although this kind work may seem highly unusual, the Ozark Koala crew enjoys making a difference in this unique ecosystem.

For more information on the history of the Cache River and its restoration visit https://www.dnr.illinois.gov/Parks/Documents/Cache-River-Joint-Venture-Accomplishments.pdf